February 22, 2010
Couple of days back I was looking for a piece of code that would populate a Flex MenuBar dynamically. Googled a lot, but I was not able to find the right solution. However, I learnt that a Flex MenuBar can be populated using XML data; but the examples found declared the XML right within the client with all data. What I wanted is to retrieve an array of objects(MenuBar data) from my database and send that to the client. I used ColdFusion ORM to do this for me. It is so nice to see a few lines of code not just retrieve the data and present it very clean; but also save a lot of time.
Let's get started:
On the server side I have two CFC's MenuBar.cfc and MenuBarManager.cfc.
MenuBar.cfc contains the mapping data:
T_MENU is the table which contains MenuBar data. MenuBarManager.cfc contains a method getMenuBarItems that retrieves all MenuBar data. The output of getMenuBarItems is as shown below: 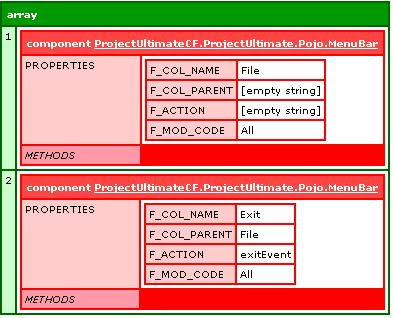 The above dump shows the Column names, their parent and the action to be taken on the client side i.e. the event to triggered when the MenuItem is clicked. Here File is parent MenuBar item and Exit is its child. The action or method exitEvent should be invoked on the client side on File->Exit .

Now on the client side after retrieving the data from the ColdFusion server, I can iterate over the resultant array of objects and construct the XML data and make that as the dataprovider for my MenuBar.

The code that would iterate over the array is as below:

//iterate over the resultant array and append menuitems to items.
for(var i:int=0;i    //if parent is null then add it to the MenuBar
if(event.result[i].F_COL_PARENT ==null)
xmlData.items.appendChild(