JavaScript debugging with Chrome Developer Tools and some tips\tricks

May 09, 2011
Last Friday I was having a conversation with Ben Nadel and Jonothan Joyce on Twitter about examining the content of a JavaScript object. While the firebug add-on for Firefox comes in very handy in examining the request\response header and for various other internals, I can’t really debug the JavaScript code by adding breakpoints. I use Google’s Chrome browser for my day to day web application development. Both Chrome and Safari provide ‘Developer tools’ which help the user not only in debugging the JavaScript code but also in examining the content of an object at any point in time by providing watch expressions. What I like about debugging in Chrome is that it is very much similar to how I debug my server-side code using ColdFusion Builder or Eclipse. This certainly reduces the learning curve to understand debugging in a browser. However, Chrome has more to give when it comes to debugging web applications.

In this post I’ll explain how Google Chrome can help you debug web applications and several other internals.

I have taken an example of a CFAJAXPROXY tag, which is used to create a JavaScript proxy for a ColdFusion component. The proxy class can then be used to invoke any method defined in the CFC (methods with access attribute set to remote):

Now to see the methods that I can invoke using the proxy object (myObj in the code); I can make use of the developer tools in Chrome. After launching the page in the browser, you can invoke the developer tools by selecting the same under settings > Tools. Alternatively, you can use the shortcut key CTRL + SHIFT + I (CMD + OPTION + I on Mac): 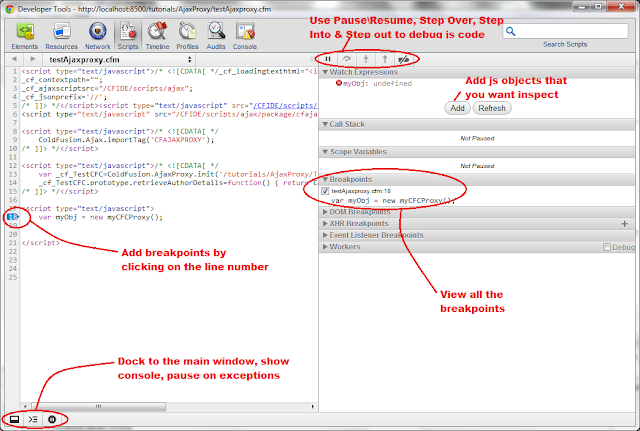 As shown in the above screen shot, you can click the line numbers to add a breakpoint. This would turn the background color of that particular line number to blue. Once a break point has been added, the same would get listed in the ‘Breakpoints’ section. To inspect the content of a JS object, expand the watch expressions column and click ‘Add’ button (myObj added to the Watch Expressions list). The button bar just above the Watch Expressions column is used in debugging JavaScript code. Once the page is refreshed, the breakpoint is hit and you can inspect the object content:

As shown in the above screenshot, the line at which the break-point is hit would be highlighted and an arrow mark at that line would also be shown. The button bar to debug the JS code can now be used: 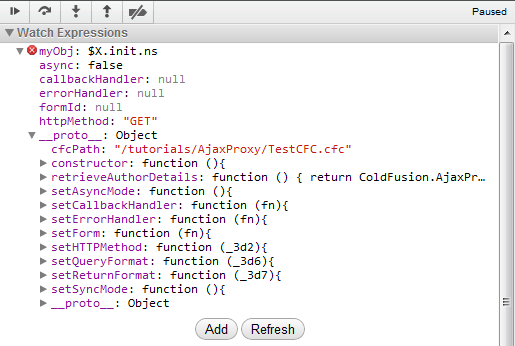 There are five buttons provided to debug the JS code:
Once the line at which the break-point was set is executed (by clicking Step Over\Step Into), the JavaScript object (myObj in the code) is populated and the watch expression indicates that. As shown in the above screenshot, the object contains several methods including the one that is defined in the CFC – retrieveAuthorDetails.