March 24, 2015
I've been working on an Angular project for good number months. There's a lot that I've learned and I've realized that the code I wrote could have been structured in a better way. I wanted to write this post sometime back, however I thought it would be better to create an application structure first and then post my learnings. I have posted all the code on github here - https://github.com/sagar-ganatra/angular-require-template. The template is still a work in progress, however the basic structure of the template is in place.


Motivation:
I always visualized a web page broken down into multiple components that are completely decoupled and components that can be reused. For example, a component or a widget that displays a chart does not have to know about the navbar in the page. It would however provide an interface through which external components would interact or change the state of it.

Why RequireJS?
In my Angular application's index.html file, I had included various script blocks that looked like this:


Here the script tags are included in such a way that the dependent files come first and then the others are listed. Every time I added a new script file in the project, I had to update the index.html file and ensure that the dependencies are always included first. Instead, I could use a RequireJS shim to declare the dependencies:

This is more declarative and less prone to errors.

This is not the only reason I would use RequireJS in my project, one of the other factors and the most important one is to provide structure to the application. I want my components to be independent or individual widgets that can be reused. When creating components I would make use of the directive interface which can then be included anywhere in the project. For example, the interface for a navbar could look like: 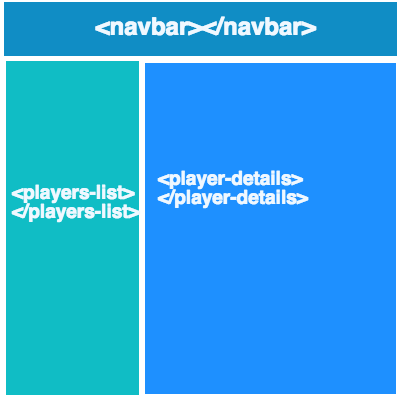 Here the directive serves as a gateway to the service that we are trying to add to the application. A directive is an individual widget which is not aware of other directives used in the page and it's service agnostic. Here in our example, the playersList directive would consume list of players and perform some action when a player is selected. The directive would provide an interface and the page that wants to use the directive can then provide the data:


Here the values provided to various attributes are defined in the controller scope. In this way, the directive remains agnostic of the data or the service that it should talk to.

In my project template, I've create a module for each directive. In this example, we would have two modules - navbarModule, playersStatsModule. I would include playersList and playerDetails directive into one single module because they serve as one entity. However, they are completely decoupled and don't interact with each other directly. The idea is to create modules that represent one single entity, which in this case is playerStats. The module definition would look like this:


It returns a function and then in the module a name is assigned to the directive.


Notice that the services responsible for sending requests to the server are listed under domain. The pages directory lists various pages in the application and the partials listed under each page contain references to these components. In this way, pages handle the application logic (events, querying the service, etc) and individual component directives handle rendering logic.

In app.js, a module for the application is created. This module will declare dependency on various other modules in the source code in addition to third party modules:


The main.js file declares the shim configuration (mentioned before) and bootstrap.js would bootstrap the application by calling angular.bootstrap on the document object.

You can clone the repository and see how the application is structured and how it is currently styled.