March 14, 2011
Tag search is that one powerful feature in ColdFusion Builder 2.0 which allows you to search for tags that match some criteria. Also, there are various actions that the user can perform once the tag is found. Actions such as
In this post I'll explain how these actions can help you increase your productivity in your day to day application development.

Action - Setting an attribute
Consider a use-case where you would like your ColdFusion application to be available to other web clients such as a HTML client or a FLEX client. In these cases you will have to update the cffunction's access attribute to remote. Updating each and every function definition can be a time consuming task. With the action Set attribute one can specify the attribute that you would like to update with the given value: 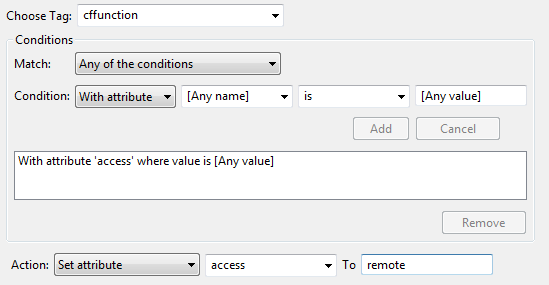 Actions - Adding text before and after the tag block

While editing a CFC containing various cffunction tags, there are times when you would like to add a generic comment before the function definition, stating its description. Also you would want to add a comment stating the end of the function tag block at the end of the cffunction tag. With the new Tag search, you can specify the tag as cffunction and then add a condition (if required) and click 'Add'. Now in the Action list, select Add before Tag and specify the text that you would like to add. In this case, it would be a comment as shown in the picture below:

Click on Replace All and you will see that the comment is added before the tag block.

Similarly, in case of Adding text after the tag block, select Add after tag and specify the text that you want to add after the function definition:


Other actions provided include Replacing a tag block and Removing a tag block. As the name suggests, on selecting the action Replace tag block, the tag block is replaced with the text that the user has provided:

Similarly if you would like to remove the tag block, then select the action Remove tag block:

All the actions mentioned above can be performed in all the scopes. Please refer to my previous post where in I have describe various scopes available for both text and tag search.